"One Team - One Mission" theme brought electric industry together in Puerto

What happened when 3,000 line workers and support personnel traveled to Puerto Rico? More than you can imagine.

To help with the historic restoration of Puerto Rico’s energy grid, electric workers from across the country rallied to create a massive support effort. Crews from nearly 60 investor-owned electric companies and public power utilities set off as one team with a single mission to fully restore electric power to the island.

The physical destruction caused by Hurricane Maria in 2017 was massive. It was recognized as the worst natural disaster on record for Puerto Rico with sustained winds reaching 175 mph. Yet the emotional aftermath on residents was equally devastating. Months without services, especially electricity can be disheartening. 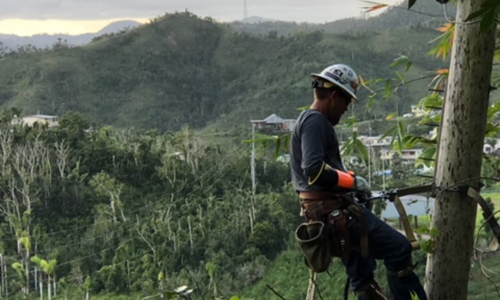 Helping others is just part of the job

Mutual aid is a common phrase used when one power utility requests the help of other utilities in repairing power infrastructure after especially damaging storms. It’s not uncommon for crews from the Midwest to help out in Florida, the east coast or Texas and vice versa. A 15-24 hour drive is normal for helping out.

But this example of collaboration was unique to the industry considering the island location and massive devastation.

Xcel Energy was proud to participate. 200 line workers and logistics personnel eagerly raised their hands to help restore power in Caguas, a remote, mountainous region in the southeast part of the island. Their equipment had to first be driven to Louisiana from Texas, Colorado, Wisconsin and Minnesota, and then shipped to Puerto Rico.

The days for crew members were long and the temperatures were warm and balmy, but the restoration work was thoroughly rewarding. When you have the opportunity to restore power for your fellow citizens who have gone without modern conveniences for up to six months, the experience can be life changing. The pure joy on the faces of the Puerto Rican people after the lights came on will not soon be forgotten by crews.

See what happens when a local school gets their power back. 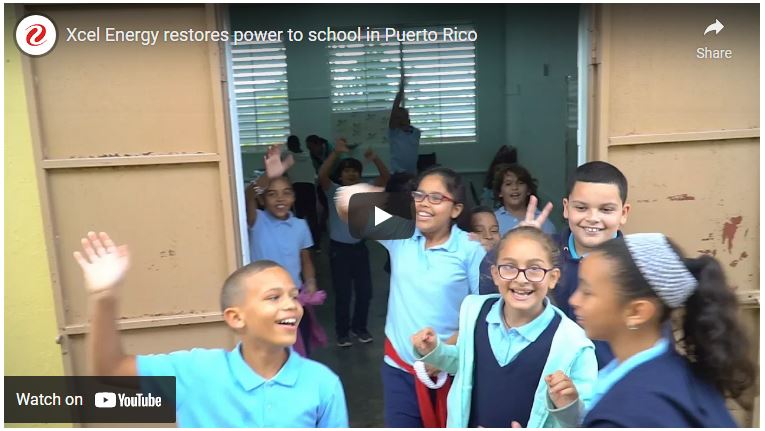 As a result of the efforts of many, the Puerto Rico Electric Power Authority (PREPA) announced that power had been restored to 99 percent of its customers across the island who can receive electricity.

A thank you to our crews

A large group of workers who responded to the call in Puerto Rico, including five of our own, were recognized at the Edison Electric Institute national convention in San Diego in June 2018. They received a lengthy standing ovation during the opening session and were also recognized at a San Diego Padres baseball game. A well-deserved honor, indeed, for one team that had one important singular-focused mission – restore power safely and as quickly as possible to our fellow citizens in Puerto Rico.

Let’s salute all who made this historic Puerto Rican restoration happen.