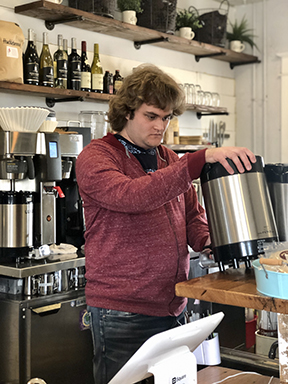 When you walk into Dirt Coffee Bar in downtown Littleton, Colorado, it’s not just the aroma of freshly roasted coffee beans, full-bodied espresso, and a hint of vanilla that hits you. It’s happiness.

But it’s more than the hum of customers deep in conversation – it’s the employees meticulously crafting each cup of coffee and the pride illuminating their faces as they hand customers their brew.

For many of Dirt’s employees, a sense of belonging isn’t something they often experience. That’s because many of them have autism.

“It’s not easy for individuals with neurodiversities to get jobs,” explained Lauren Burgess, executive director of Dirt Coffee. “Ninety percent of individuals with autism are unemployed or underemployed.”

Dirt Coffee is a 501(c)(3) organization and the 2017 recipient of the Xcel Energy Colorado Employee Choice Grant.

“The grant made a significant difference for Dirt,” Burgess said. “Every single intern we’ve taken on has never had or job or has been unsuccessful in a job. And it’s not them; it’s society. This grant has the potential to change lives.”

Since its founding in 2013, Dirt has trained and employed more than 30 individuals on the spectrum. In addition, it has provided more than $32,000 in scholarships to the families and caregivers of neurodiverse individuals.

However, Dirt didn’t use a single penny of the grant money to open its brick and mortar store in the spring of 2018. It invested the entire grant into its employment program, which hires and trains interns with neurodiversities and provides them with valuable skills they can apply in a variety of workplaces. 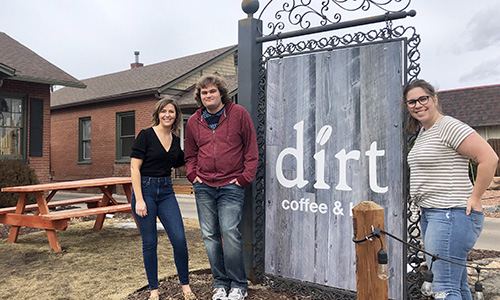 The employment program lasts three to 12 months and accepts new interns every quarter. The program includes job coaching and shadowing, and teaches interns how to work in a coffee shop, from ringing up customers at the cash register and stocking shelves to operating the espresso machine and manning the mobile truck. After interns graduate from the program, they can stay with Dirt or choose to apply elsewhere.

“They have lots of choices,” said Emily Wallace, director of employment. “We have one graduate who drives for Door Dash, another who went on to intern at the library...”

“And now, Dirt partners with DSW in Littleton,” added Burgess. “The manager was a customer and he saw what we were doing and wanted to help, so he carved out a program for Dirt interns.”

Economic stability is one of Xcel Energy’s grant focus areas, which made Dirt an ideal candidate for the Employee Choice Grant, a community-minded initiative driven by employee nominations and votes.

For the grant, Colorado employees nominated a favorite Colorado-based 501(c) 3 nonprofit for the chance to receive $20,000 from the Xcel Energy Foundation. And it was Jeffrey Klarner, the father of one of Dirt’s former interns, who nominated the nonprofit coffee company.

“Employees really connected with Dirt Coffee’s mission,” said Kynnie Martin, senior foundation representative for Xcel Energy. “Our employees have shown an interest in providing opportunities for people who wouldn’t necessarily be awarded the same opportunities as others.”

After Dirt won the opportunity to apply for the grant – out of 60 total nominated organizations – Dirt brought its mobile coffee truck to Xcel Energy’s 1800 Larimer location in downtown Denver so employees could get a true taste of what Dirt is all about.

It was a frigid December morning, but that didn’t deter employees from coming out to grab a hot cup of craft coffee and meeting the people behind the operation.

“It was such a happy, buzzing atmosphere,” Burgess recalls. “Daniel, who managed the truck that day, told everyone to ‘have a magical day.’ Everyone loved his energy and could see how excited he was to be involved. It was great for Xcel Energy employees to see what coffee can do and how much power coffee actually has.”